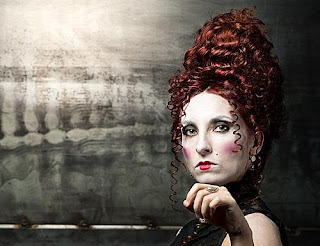 A performance commissioned by Intermediae Matadero Madrid and developed by the Yoctobit Collective. Premiere in 20-22 January 2012.


Mata La Reina ("Kill the Queen"), the play, the game: Subject to the extravagances of an authoritarian, egocentric Queen obsessed with keeping control, the resistance fighters (the players) must prepare and execute a plan to overthrow the reigning Queen. In this test, members of the audience become human pieces on a gigantic board of hexagons. To depose the Queen, they must collect a set of elements that form a puzzle and solve it as a group. Music and Sound Design
The sound in Mata La Reina attempts to reflect the disturbed personality of the Queen - a despotic tyrant troubled by assorted personality disorders. Her mood swings with the wind, and the only consistent aspect of her character seems to be her inveterate vanity. Those features guided the composition of the Queen's Anthem, which was triggered with slight variations every time the Queen was to make a speech; it's a collage of several fragments of pieces by Stockhausen, Messiaen and Lutoslawski, interwound with electronic loops and Édith Piaf's legendary rendition of La Vie en Rose.
Sci-fi and dystopian cultural references are other important models for the soundtrack. Music and sound effects are treated as a single object, both illustrating the post-industrial scenario of the piece and suggesting moods for play. 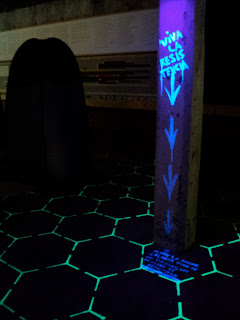