Father-Son is a networked musical drama. It was staged for the first time on 3 March 2013 in an event linking the Sonic Arts Research Centre (SARC) and the School of Music of Queen's University Belfast.

Father-Son from Felipe Hickmann on Vimeo.

One stage, representing the fictional present, introduces a gay man trying to come to terms with the views of his old conservative father. The other venue stages the son's memory; the same characters inhabit an open universe where personal stories of trauma, hope and friendship could provide the answers that the son so urgently needs.

Intermittent audio and video links between the two spaces allow for glances into the past, drawing interfaces between reality and memory.

Father-Son comprises two alternative endings - one where the son discloses his sexual orientation to the father, and one where he keeps it a secret. The duty to decide lies with the public, as action halts onstage and audience members are invited to participate in a location-based game scenario. This collaborative stage entails active exploration of both fictional spaces by the public, who search for facts that might inform their decision.

Objects often appear fragmented or incomplete; dislocated participants must cooperate in joining together pieces scattered along reality and memory. Decision is manifested by standing on either side of a line, which splits the play area into two halves. 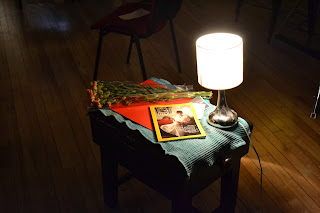